Edit
watch 01:36
We're Getting Mutants in the MCU - The Loop
Do you like this video?
Play Sound

Main Location of Vampyr is the London of 1918. The great war is just over, the government struggles to build up the country and the Spanish Flu is spreading rapidly in this time of conflict. Mentioned in DONTNOD's Webseries: DONTNOD Presents Vampyr Episode 2 - Architects of the Obscure are Whitechapel, East End Docks, West End and the Poplar Hospital[1], where player character Jonathan E. Reid works as a surgeon.

Each location has a "health status" (see "Citizen Menu") which should be kept in a balanced state. Players can check citizens for their health and create medical treatments to heal them. Jonathan should rest so this can take effect and updates the status.

There are 6 possible states:

→ To embrace certain citizens can change this status. Some are the pillars of a citizen circle and often part of crucial quests.

→ The worst case is "District Lost", which occurs when the critical threshold has been exceeded. This district is then unstable and will more and more descend into chaos. Quests can be lost this way due to missing Citizens. More dangerous enemies will appear.

Here comes a roughly map of each locations.

PEMBROKE HOSPITAL CLOSED DUE TO LACK OF HYGIENE! 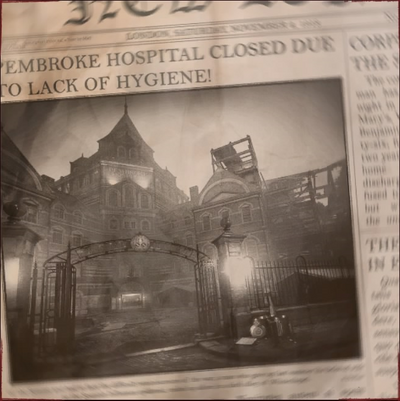 For months, the Pembrok Hospital remained the only steadfast medical
facility in the East End of London. This morning, the building irreversibly
closed its doors. Local authorities, following a formal assessment of extreme
squalor, ordered the facility shutdown. It seems the hospital helped the
spread of disease.
The Pembroke administration has yet to issue an official statement, but the
extremely low number of people who left the hospital in good health during
the last weeks corroborates the theory of mistreatment, and poor medical
practice. With a capacity for little more than three hundred, some more
dead than alive, shoehorned into the rooms and even corridors of the hospital!
Several honourable physicians had criticized the establishment prior to this
catastrophe for the opacity of its financing arrangements. It is recommended,
should you want to maintain your physical well being, to seek medical help
with proven professionals elsewhere.
S.L.A.
Disclaimer: today's New Londoner article was replaced by a contribution
from our special reporter Solomon L. Anthelm. Your usual E.W. column will
resume once redacted according to the regulations in effect.

THE FALL OF WHITECHAPEL IS OUR FALL 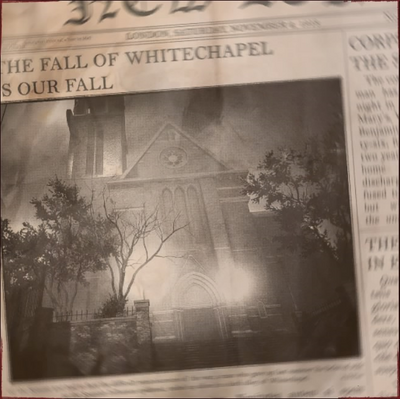 You, with enough money to buy this paper, enough contempt to scoff at the
title of this article, yet enough curiosity to read it anyway, should be informed
about the truth of the so-called news you read in the press of London.
Last night the Whitechapel district was evacuated following an abrupt rise in
mortality rates. Thousands of inhabitants were hastily relocated, filling
hospitals and wards that were already overflowing with terminally ill
families, many in bad health, and most of them fearful after days and nights
of silent terror. Will you read about this catastrophe elsewhere? No. Am I
allowed to write about it? Even less so. Journalists are gagged, silenced,
forbidden to raise awareness about the horror that dances before our very
eyes.
Hear me: London is falling. Protect yourself and your loved ones from this
sickness, but do not close your eyes to it. It is here, and its thirst craves young
and old, rich, and poor.
Many thanks to my colleagues (whose names I will keep private for their own
safety) who helped me bypass the censorship that is the true plague of
London. I assume full responsibility for this publication and beg the
authorities to end their insane control.
E.W.

NO NEWS FROM THE EAST END DOCKS: 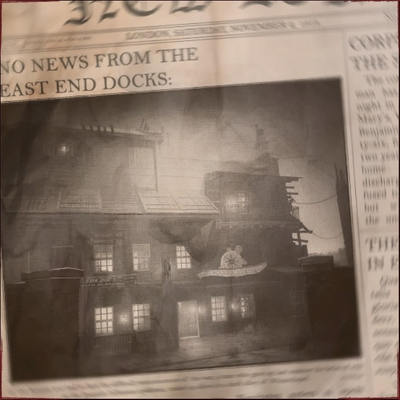 No, this catastrophe is no surprise! Since 2 am today, the Docks of the East
End are officially segregated. The police report stated that 'A sudden
escalation in violence have forced the authorities to isolate the area.'
Inhabitants were evacuated to temporary shelters.
Since then, local authorities, and Scotland Yard have been juggling their
responsibilities in this event: was it the fault of the gangs that bled out of the
district, unopposed, or the rumoured madmen that killed the inhabitants,
uncaught? No, it wasn't. Those who say this came off as a surprise are liars,
blind men with the judgment of children. It wasn't the gangs: they have been
part of our city for so long that crime is part of day-to-day life here. It wasn't a
serial murderer: our physicians refuted the idea, identifying causes of death
that ranged from old age and sickness, to homicide. No, it wasn't a single
specific culprit, despite your hopes. It was you. Me. Everyone. Everyone
foresaw this fall, and now, cowards that we are, we pretend to be astonished
when faced with the inevitable. It is we, who did nothing, who should repent.
My thoughts go to friends, my neighbours, and to strangers alike. May you
find your loved ones safe and well.
E.W. 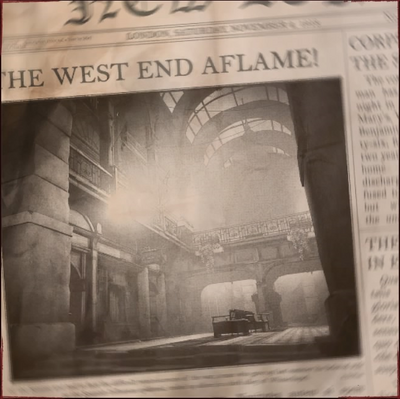 As I write these lines, the heart of London has stopped beating. This morning
at 3 am, police forces organized the evacuation of thousands of residents,
insisting on the urgent nature of the situation. Thieves and freaks having been
driven mad with the fever were flooding our streets. Our forces were too few,
and their crazed malice was too great! We are spread thin across London,
and it is from a barricaded shelter that I write this dire report.
What overran our beloved city? Was it the plague? That rumoured illness
coming from the most forsaken parts of town. Or was it the Lord himself,
telling us to flee a London that had become too corrupted, too unfaithful?
Either way, our homes have burned, and nothing remains. Aloysius Dawson's
vision of the West End kept safe from the fiery menaces of outer London was
proven right. A wall was the only thing that might have kept us from such
violence! But it's too late, now. So here we are, crying over lost children,
siblings, and parents. Forced to wait for some sign of sanity, while surrounded
by lunacy and anarchy! The West End has fallen. How can the country survive
this stragedy?
S.L.A.